xxxx xxxxxxx xxxx
Session 6 had 4 players and we met to play on as seems typical on a Thursday.
We also had a new player.

As with all sessions, this adventure began at the gates of Castle Torrog.
The party descended down into the valley below, whereupon they spied the old damaged tower.

The party decided that they wanted to explore the ruins, but this meant sneaking past the tower...
Unfortunately, the goblin on watch was both alert and perceptive.
So the goblin spotted the sneaking party, blew his horn and ran down the tower, alerting his companions as he did so.
The party thought about just running into the dungeon, but past experience has taught them that this can cause problems later on. Being ambushed by goblins as you leave a dungeon with depleted resources is not desireable.
Once the goblins were defeated, the party trashed the already damaged tower.
Luckily, nothing came along to bother them in that time.

Next, the party decided to take a rest in the old damaged tower themselves.

uring the party's rest, an ogre came onto the scene to have a look around. The ogre headed into the old damaged tower and a fight ensued between the party and the ogre.
Despite its strength, the ogre is both slow and clumsy and the party defeated it without suffering any damage.

So after their rest. the party decided to head into the ruins once more. The party headed towards the room where they encountered the shadows previously.
By the time the battle had been won, 2 characters had been put to 0 HP. Shamos was nearly 'insta-killed' by a critical hit from a shadow.

After the battle, the PCs went into the final room and collected the loot. 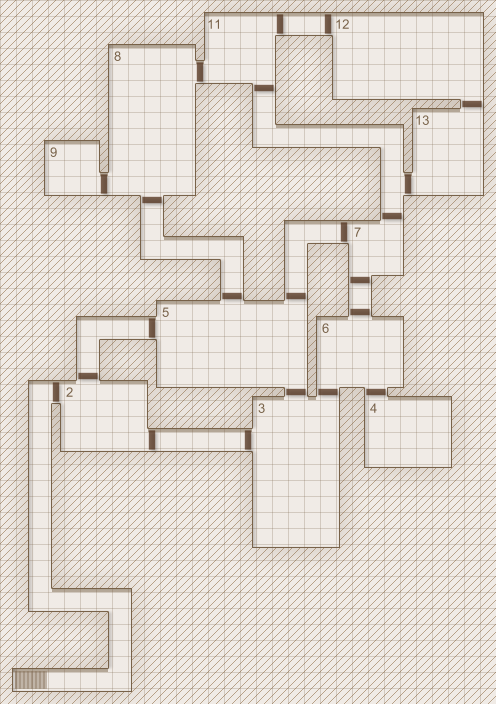 What the players found on level 2.
After having collected their rewards, the party having explored the level, chose to leave.
Once the party were on the surface, they decided to head north. Back to the trail that they were told leads to the goblin camp. They knew that the 2 magical lion figurines had been abandoned here and hoped to retrieve them.

The party followed the trail northwards for a while and spotted a goblin patrol (that has also spotted them).
The 2 groups headed directly towards each other. A straight on battle ensued.

The party were victorious.

After the battle, the party debated on their next actions. It was decided that instead of pressing on to try and find the lost items, that they would return to Castle Torrog.

As the party headed back into the mountains, they spotted a large patrol of goblins, 17 to be precise.
Considering this was the end of the evening and that there were 17 goblins, the party decided that discretion was the better of valour and fled.

After fleeing the goblin encounter, the party made it back to Castle Torrog.
​
​End of session six.